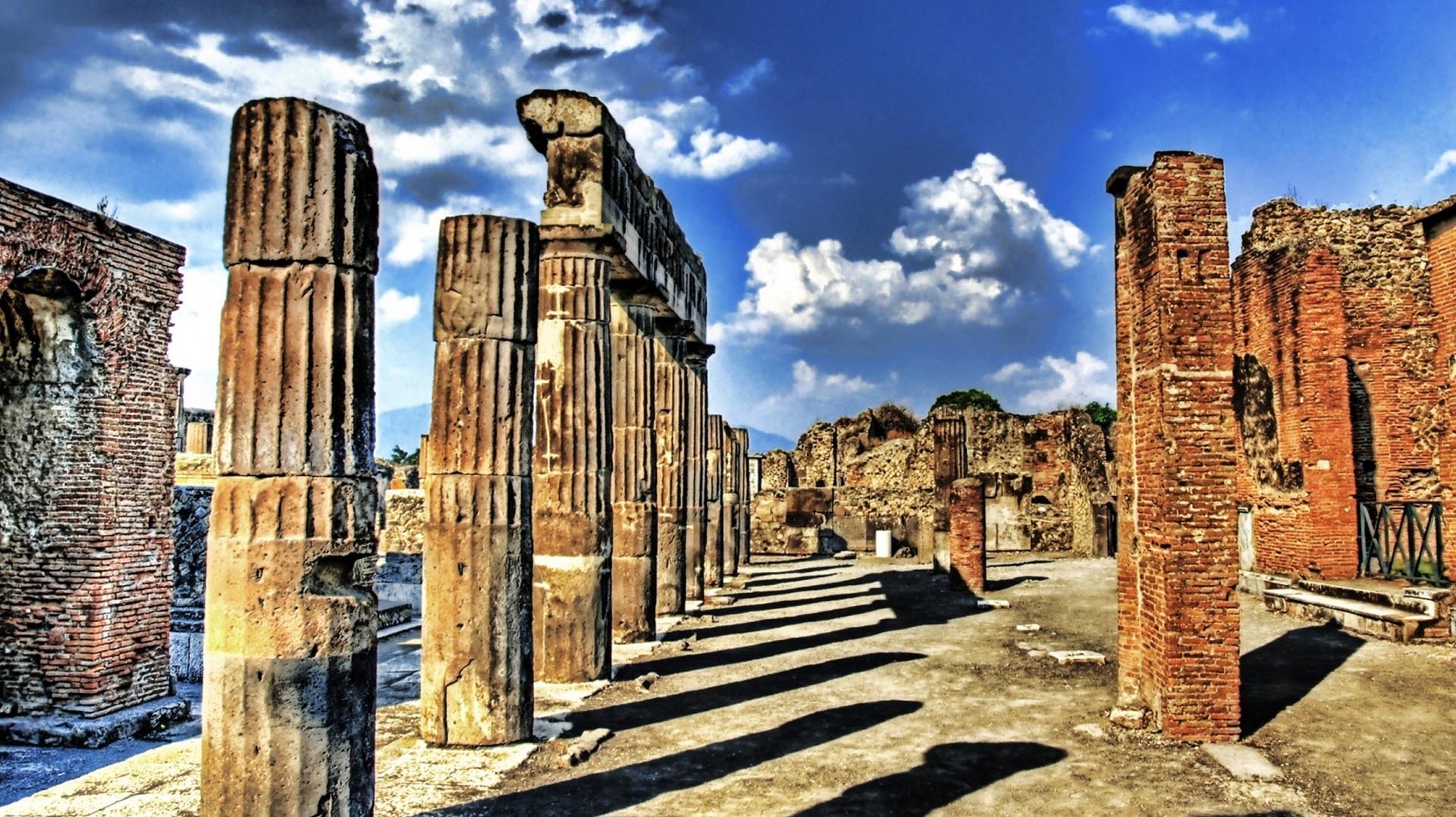 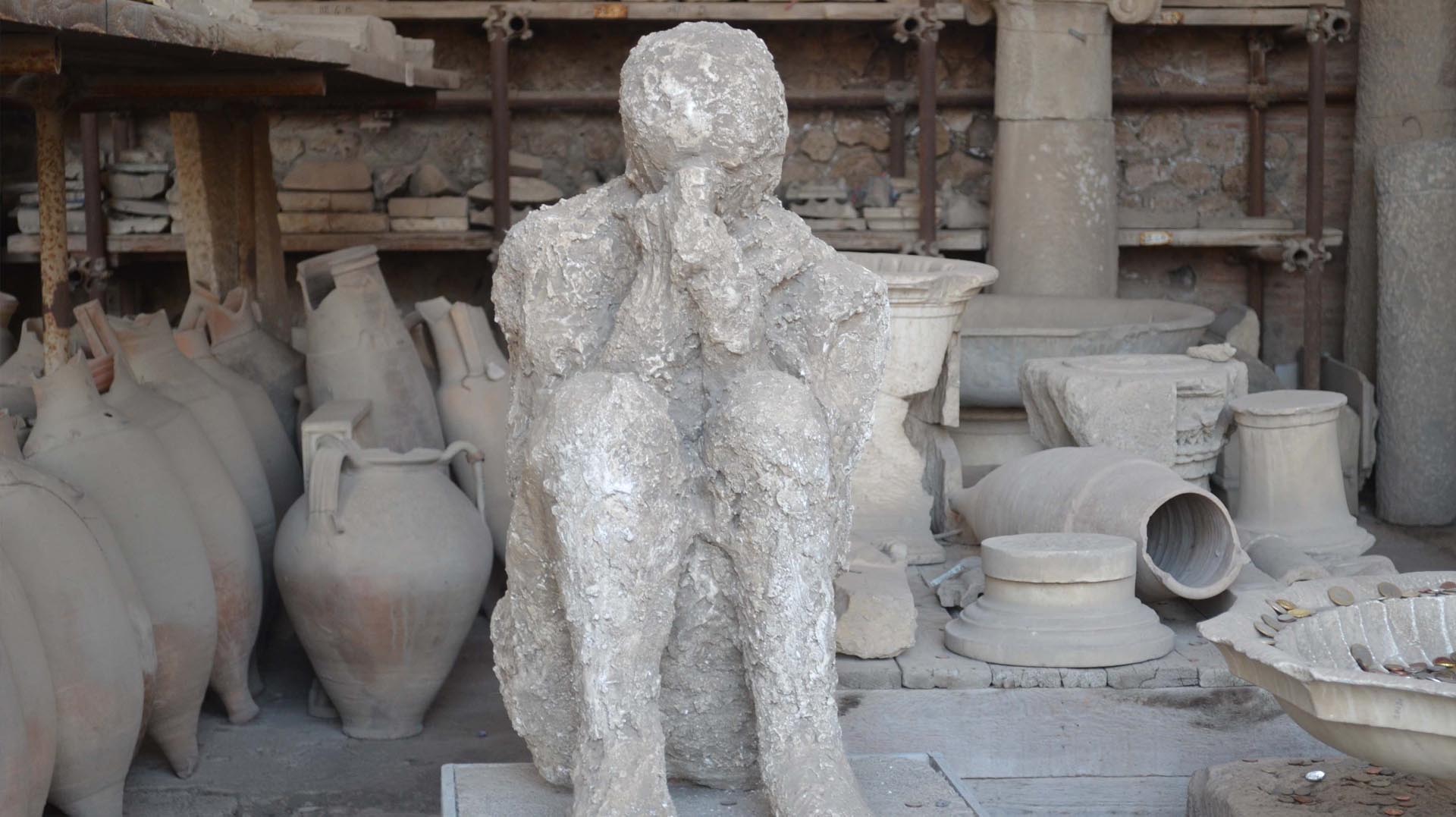 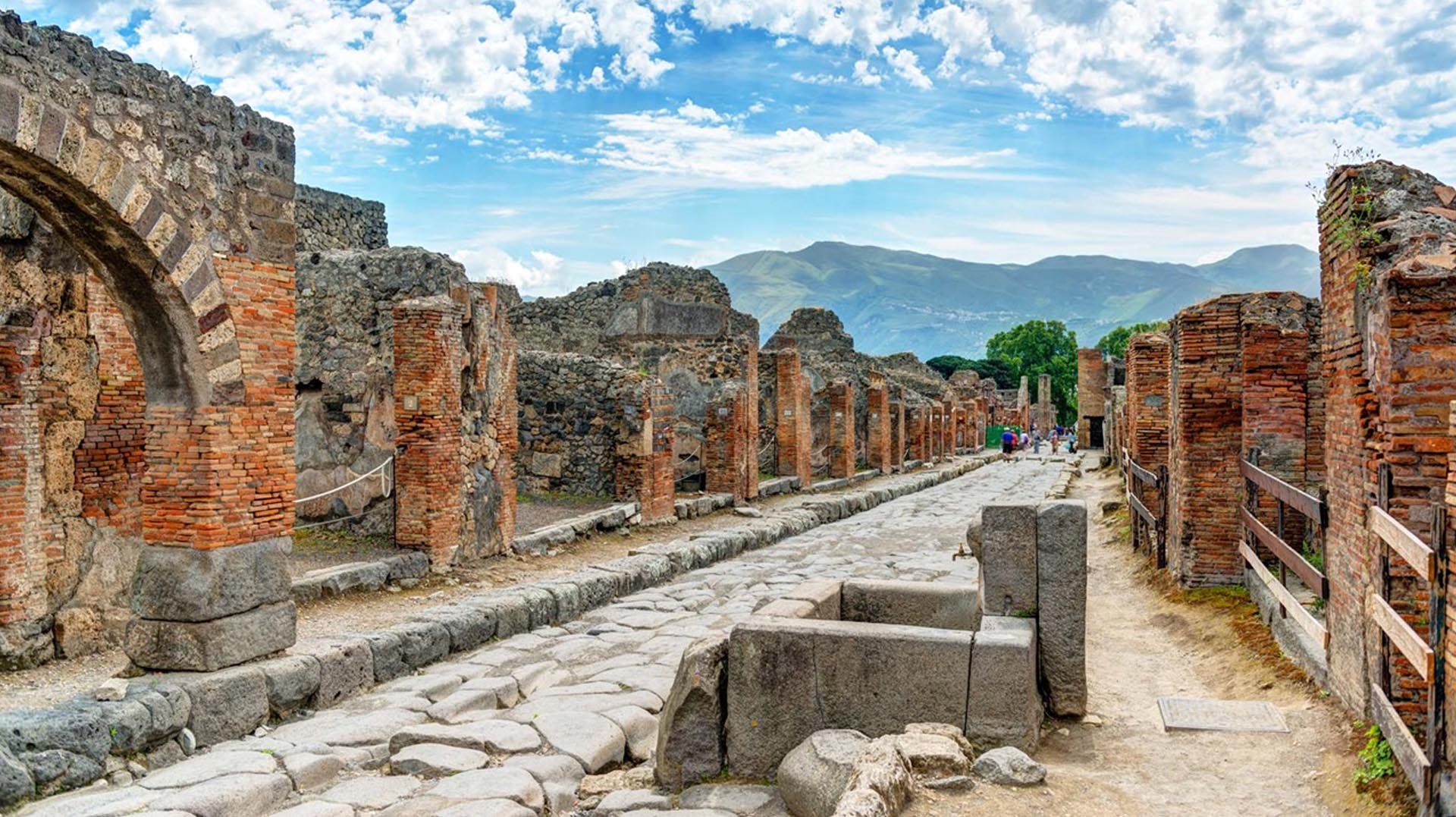 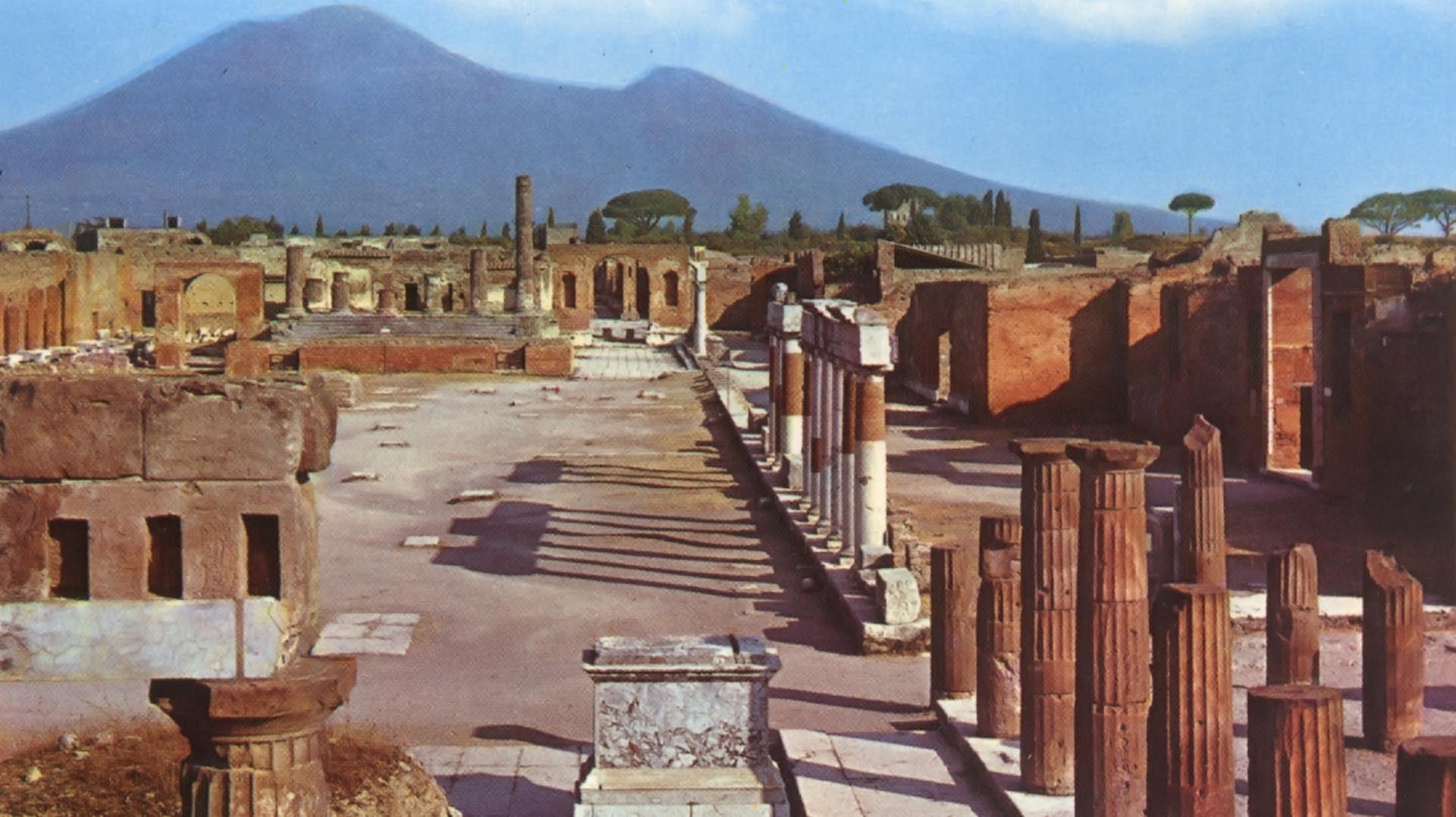 A little bit of history

Pompeii was built on a lava plateau, bordered by a canal which was used to connect the city to the nearby seaport. A city with an area of about 66 hectares, housing dating to the sixth century BC.
On the ending of the fourth century BC as a result of continuous pressure by the people of Samna, Pompeiihas sought protection from Rome which was granted and starting from that moment it has had a political organization called ROMAN RES PUBLICA.
Over the years, the population of Pompeiihas called for more political and social equality to Rome, a request that could not be satisfied, and so in 89 BC there was the first rebellion. Pompeii was under siege by the troops of “General Silla” and in 80 BC Pompeii became a Roman colony.
With the condition of colony, Pompeii was enriched and embellished with public buildings, especially under the Emperors Octavian Augustus and Tiberius.Its importance as a commercial centre has developed increasingly because Pompeii was the centre of many activities.
To all this wealth was given a first hit in the year 62 because a violent earthquake, suffering serious damage. But the people of Pompeii was not discouraged, 4despite the city was almost destroyed, and began to rebuild the city even more beautiful.
In 79 AD Pompeii was still under construction when in August 24th, around noon, a catastrophe of enormous proportions had stricken it: the explosion of Mount Vesuvius, an explosion of lava, ash, gas, pumice and lapillus that destroyed everything in Pompeii, and then it has been buried for more than 1000 years. Then with the advent of Charles III of Bourbon, King of Naples, in 1748 began archaeological excavations. From this historical moment Pompeii was the largest destination for travellers and historians coming from all over the world.
But for beginning to have a more thorough archaeological study it was not until the mid-1800s, when the Neapolitan Nicola Fiorelli, a great professor of archaeology, has started to divide and classify all the material found, a huge work that from 1924 to 1961 another great archaeologist, Amedeo Maiuri, continued. Thanks to these people and to others with a great talent, we can admire a historic treasures of inestimable value, collected and shown in the most important museum of classical archaeology in the world, the “Archaeological Museum of Naples”.
A walk among the ruins of Pompeii is a unique experience that leads us to discover the lifestyle in ancient times. In fact, the most striking feature is the number of houses that are still intact today. Even more surprising is the amount of furniture remained intact allowing us to discover the lifestyle of the inhabitants.
Some famous buildings are “Menander house”, “House of Vetti”, “house of the Faun” and “Villa dei Misteri”, for their paintings and frescoes. All this, with many more details gives us the chance to know a civilization still unrivalled, with a history spanning 2500 years, the civilization of Pompeii.
(Many more details gives us the chance to know a civilization still unrivaled, with 2500 years of history, civilization of Pompeii)

Helpful informations about the tour

We highly recommend the pick-up approx. at 8:00 – 8:30 am
Starting from Naples, we can spend about 30 min. to reach Pompeii and this usually would be the first stop for the tours that include a visit to this incredible archaeological site. Here you can admire everything that was before the explosion of Vesuvius, which was covered by ash and pumice stone. You can combine this archaeological tour with other beautiful location, personalizing your schedule using our suggestions.
And please, note: LimoServiceNaples offers you only suggestions, taken by our experience in years and by experiences of other travellers, but you are free to decide for another plan of your trip, other locations, in order to personalize your great tour experience with us.
(If you need to know something about us, you are very welcomed to enjoy our video, just a little of our company profile)

A private tour of Pompeii , can be combined with a charming tour of Naples, a city tour where you can “taste” the most important tradition of this incredible city, and discover incredible and unforgettable spots. Or you can tour Pompeii combining this fascinating place with other archaeological sites, just as Herculaneum or the legendary Mount Vesuvius. Another great tour package could be Pompeii and Coastal scenery (Sorrento Coast and Amalfi Coast): a very enjoyable excursion because you have the opportunity to reach the Amalfi Coast (there you will be enchanted because the charming atmosphere, little streets and other unique details) stopping to the gorgeous village of Positano, driving on the panoramic and charming peninsula road, looking at some little villages little less known but charming too!

If you wish an exclusive experience, you can schedule Pompeii and the wonderful Capri island; a private tour of Capri (escorted by a professional private guided) is a breathtaking trip: the guide can show you the best part of it, historical Roman villas, looking at beautiful scenery, spending a wonderful time through the narrow streets, get shopping, and admire spectacular views on the bay of Naples; Then, you will take the hydrofoil to Sorrento (about 25 min sailing time), where your driver will wait you for a quick view of its highlight spots and depart toward Pompeii.

What else do you want to discover?

The welcoming starts in Naples, the perfect place where start your tour. Here you can feel some of the famous traditional features: the legendary hospitality, the incredible and natural beauty, the great clime, the history and famous culinary art.

Beautiful archaeological site, where you will admire what it was before it was completely buried beneath the ashes of Mt. Vesuvius. A walk amongst the excavations of Pompeii is a unique experience that captures the feeling of life in ancient times: Journey into the past!

The incomparable beauty of the Amalfi coast has captured visitors from all over the world. Overlooking the serene blue of the sky and the sea, Amalfi is blessed with an incredible lush vegetation and flowering fields, a unique scene with an unforgettable natural beauty.

The beauty of location it was an attraction and inspiration for so many poets and artists, like the greatest tenor of all time, Enrico Caruso. The marvellous scenery makes Sorrento one of the most famous tourist attraction in Italy, a tranquil place to be enjoyed in all seasons for its mild climate.

Moving from Naples, in about 1:15’ Positano is the first village that you meet along the Amalfi coast. Touring this area you will admire and photograph a unique coast scenery. Walking through the little streets and visiting the famous Positano shops, you will know why so many world famous artists want to stay in this gorgeous little village.

Located on one of the higher hill of the Amalfi Coast, Ravello is renowned for is relax and calm atmosphere. Tour through this old streets you see the magnificent and well preserved gardens of private villas, churches and monuments, it is like go back in time in this beautiful and cultural medieval little town.

Another famous archaeological site very close to Naples, where a very well preserved large number of beautiful villas were discovered.

Walking at quota 3200 Ft, you will go ahead toward the crater walking through the amazing path up there: an incredible view of the Volcano!

The tour of Capri, it’s not only “Blue Grotto” and “Faraglioni”.

Feel the exclusive atmosphere of the “VIP island” of the Region!

The Royal Palace of Caserta was built by Charles of Bourbon, King of the Two Sicilies, who in 1750 bought the land on which to build the palace. Later, Charles III of Bourbon commissioned the architect Luigi Vanvitelli to realize the monumental construction.

Tuscany nowadays is considered the cradle of the Italian art because is the land where the Italian language and the Italian art was born. Florence is greatest example; there you can appreciate arts from Gothic to the Renaissance.

Rome is today one of the most important tourist destinations, for its huge inheritance of archaeological and artistic treasures, thus like for its tradition and the beauty of its ends, the parks and the villas.